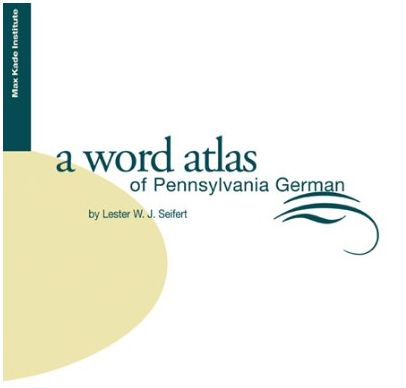 This is the most extensive reference work documenting linguistic variations in Pennsylvania German (also known as Pennsylvania Dutch), the dialect now spoken primarily by Old Order Amish and Old Order Mennonite communities in the United States.

This Word Atlas displays more than 170 maps showing regional variants for a word or grammatical form throughout the former German-speaking regions of southeastern Pennsylvania, as well as helpful maps of Pennsylvanian geographical features and political boundaries. One of the pioneers in linguistic research on this dialect, Lester W. J. Seifert of the University of Wisconsin–Madison and his colleague Carroll Reed of the University of Washington interviewed almost 100 speakers in these regions during the 1940s, using an extensive questionnaire. This research, graphically represented in the Word Atlas, is an invaluable record of a historically and culturally important language that is rapidly dying out. The volume also reprints four of Seifert’s classic essays on the dialect geography of Pennsylvania German, as well as biographies of the linguistic consultants, an original essay on the development of Pennsylvania German dialectology and linguistics by Mark Louden, and a new biography of Seifert by Howard Martin and Suzanne Treichel.