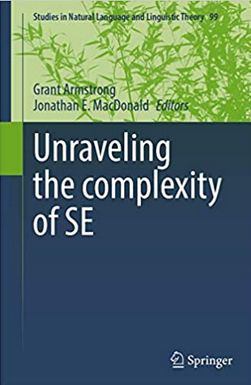 This book makes a novel contribution to our understanding of Romance SE constructions by combining both diachronic and synchronic theoretical perspectives along with a range of empirical data from different languages and dialects.

The collection, divided into four sections, proposes that SE constructions may be divided into one class that is the result of grammaticalization of a reflexive pronoun up the syntactic tree, from Voice and above, and another class that has resulted from the reanalysis of reflexive and anticausative morphemes as an argument expletive or verbal morpheme generated in positions from Voice and below. The contributions, while varied in both empirical content and theoretical approach, all serve to highlight different aspects of the overarching idea that SE constructions have evolved from these two distinct grammaticalization paths.

The book appeals to researchers and academics in the field and closes with a unified approach to various SE constructions that makes important use of its status as a verbal morpheme. In addition to aligning a novel string of empirical contributions under a new theoretical umbrella, a clear research direction emerges from this volume based on the morphosyntactic nature of SE itself: Is it a clitic, an agreement morpheme, or a verbal morpheme?