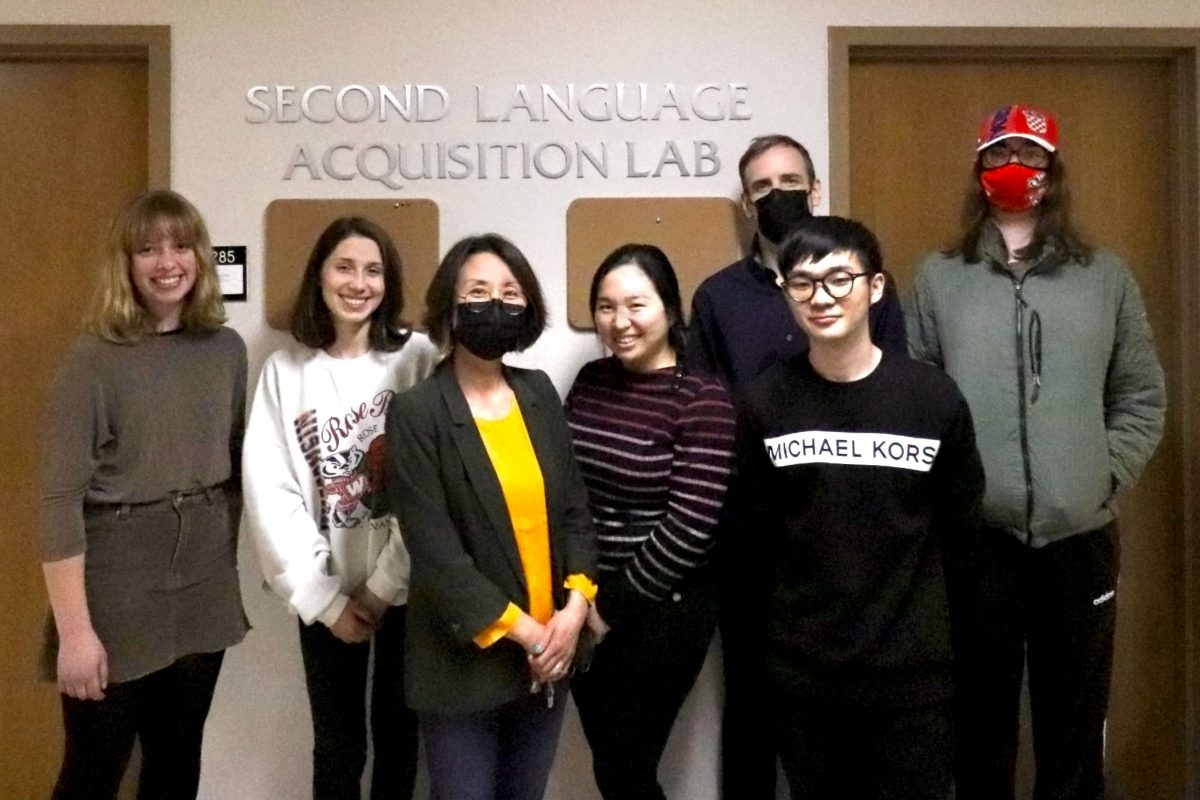 This story is the first in a series of articles highlighting the wide range of research going on in language science labs across campus. Linguistics major and Lang Sci media intern Miranda Vescio will visit each lab and share a special peek into some of the exciting research opportunities our faculty are providing for students.

Story and photos by Miranda Vescio

The Second Language Acquisition (SLA) Lab, founded in 2014, has provided opportunities to explore the fascinating area of second language (L2) acquisition. The lab director, Jacee Cho, and lab assistants, including both graduate and undergraduate students, are currently working on several intriguing projects which take formal linguistic as well as psycholinguistic approaches towards furthering our understanding of second language acquisition. 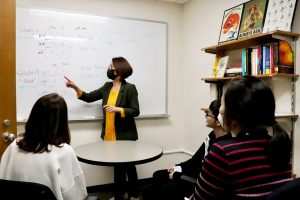 One of the research projects currently underway, being pursued by Drs. Jacee Cho and Moldir Oskenbay, is actually a study of L3, or third language, acquisition of English in Kazakh-Russian bilingual speakers. This project is particularly interesting because despite trilingual speakers not being uncommon in the world, L3 acquisition has not received much attention from researchers. This study also deals with three languages which are quite typologically distinct. For example, Kazakh is an SOV  language, meaning that sentences are structured with the subject followed by the object followed by the verb. In contrast, English and Russian are considered SVO (subject-verb-object) languages. Another distinction that makes English unique from Russian and Kazakh is the fact that English is the only of the three that utilizes definite articles (i.e., “the”). While the researchers are still in the process of collecting and analyzing pilot data (especially with setbacks to in-person data-collection caused by the pandemic), lab-members are excited for the opportunity to work with colleagues in Kazakhstan and potentially travel there to further the study.

Another current project is investigating L2 acquisition of definiteness for speakers whose first language does not use definite articles, especially in relation to how implicatures related to definite articles are acquired. Two undergraduate Linguistics majors, Eleanor Sand and Leksi Scarr, have been accepted to co-present some early findings of this study with Dr. Cho at GASLA (Generative Approaches to Second Language Acquisition), a linguistics conference in Norway this May. Their poster is titled “Conversational Implicature for definite plurals in L2-English”. 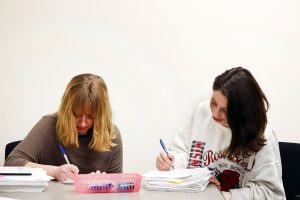 Another lab member, English PhD student Vatcharit Chantajinda, recently had the opportunity to present a paper at the AAAL (American Association for Applied Linguistics) conference in Pittsburg, PA. While this conference primarily focuses on issues of teaching and pedagogy, a number of presentations, like Vatcharit’s, are also about linguistic processing. His paper is titled “Crosslinguistic influence in offline judgments and online processing in Thai learners and the English passive”, and examines crosslinguistic influence on the conceptual processing of L2 English speakers.

Working in a research lab setting gives students of all levels valuable academic and professional experience, and challenges them to apply what they have learned in the classroom in working with real world data. As you can see from the photos, it’s a lot of fun as well!